Lots Of Sailfish And Some Mahi Mahi

If we didnât have bad luck would we have luck at all? Started the day catching some bait and started fishing around 8:15. By 9:45 we had raised 20 sailfish, had 12 bites and caught 6. The bad luck part! We burned two fish off by crossed lines in multiples and during the 5 banger we released the first 4 fish and chasing the last down to reset we were gaining line with almost 400 yards out. We we cranked away a turtle was approaching the line, we tried like hell to steer it around the turtle but a big wave came and caught the line and kept it in front of the turtle getting wrapped up and breaking us off. It was as fast as I could re tie and keep the baits going we were fighting or getting hit from sailfish. Multiple fish fighting over every bait. We caught the quad giving us 6-12 releases in a little over an hour. The next 5 hours after the fleet showed up we never saw a sail or had a bite of any kind. Meanwhile the fleet picked away I heard of many multiples including 3 triples. My head went in the gutter at 1:30 and I ran north 4 miles and set out. We raised a triple, had 3 bites missed one, caught one and chaffed our second leader of the day ð¤¦ââï¸ð¤·ââï¸! Reset and caught a triple header of mahis and that would be the last bites of our day. 7-15 on sailfish, 3-3 on mahi including a bonus mahi mahi in the bulls belly. We did manage to get 4 @thebillfishfoundation tags in fish. Hope it continues... 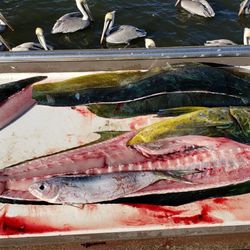