Had a 3/4 day scheduled with repeat client Josh and his buddies Brock, Corey, Amanda and Lauren. We started our day buying some live bait from Stuart Live Bait and headed offshore for some brown bait for bottom fishing. We caught some brown bait but were greeted with 2 knots of tide in 72ft of water. After loading up I started bump trolling some live bait and immediately had a couple kingfish bites but both got away. We then caught a shark and then no more bites. Made a move and tried to do some bottom fishing we had 4 knots in 110ft. Lol crazy! We were able to get a couple drops in with successful drifts and a bite or two but pulled hooks. Then we snagged bottom 3 times in a row so I gave up. Ran NW to try and get out of the tide a little and we found an area that was 3.3 knots. We caught a throwback red grouper and a red snapper. Gave up and moved in to 65ft and marked really well electronically so decided to anchor up. Had 600ft Of scope out and had to use 24oz to hold bottom. We had a few feeble bites on the bottom but did not connect and also a king nite on the surface that got away. Moved SW and saw a kingfish sky and set out. We had decent action over the next hour. However, our first 3 bites went away including me de hooking a fish with the gaff. LOL! We all agreed not to buy lottery tickets tonight. Thankfully I got mine yesterday... we also had a a few dish clip us above the wire. I made some changes and we caught 10 out of the next 13 bites with some quality fish in the mid teens and a 31lber to top the catch off. We had our limit and decided to call it a day! 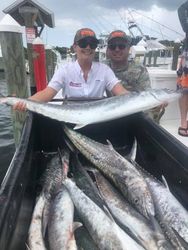 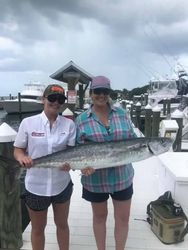 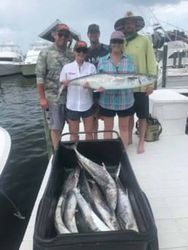