Great Day And A Lot Of First

Today we fished a 3/4 day with Gilbert, Joe, Cindy and Christopher. The goal was to catch some sailfish, especially a first for Christopher. I had some bait penned up and I added some fresh caught bait in the morning and we headed off to where we finished with a triple yesterday. Put the bow Tigress Outriggers & Gear kite up and gave the guys a tutorial. I went to put the stern kite up and heard commotion, we had sailfish on jumping under the bow kite. I ran up to help Gilbert but it was over before I got there. I went into speed mode and got a full spread out and shortly after a hammerhead showed up and we hooked it and fought it for 5 minutes before parting the leader. A little lull and then the kingfish went to a skyrocketing on our baits. Definitely a cool sight but with all mono out for sailfish we didn’t come tight. We drifted another 45 minutes without a bite. I decided to make a 9 mile power move south to we’re on and off consistent fishing had been in shallow water for the last couple weeks. We set up and shortly there after Christopher was hooked up and released his first ever sailfish. Pressure was off and I got fresh baits on the bow kite and then we raised a quadruple header of sailfish to our two stern kite baits. We had 2 fish fighting over each bait. We hooked two and I pitched a flatline. Never got the other two to bite but we had a double on for Cindy and Joe. Cindy’s fish chaffed off after about 10 minutes and we caught Joes.

A little while went by with no bite. I moved back south and set up. After a 1/2 hour and time running out I offered to go try something different to catch dinner. The group decided they wanted to try and catch Cindy her first Atlantic Sailfish to go with Joe and Christopher’s first ever sailfish. Gilbert and Joe decided to crack their first lucky beers of the day and Joe never even got a sip before a sailfish pilled on the stern short bait. Cindy was hooked up and 20 minutes later it was high fives all around.

3 for 5 see 2 others and all first for our anglers today. Been good week for cherry popping...

Here are pics I took of our fish today. 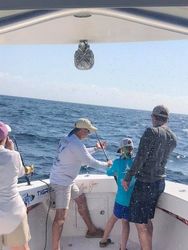 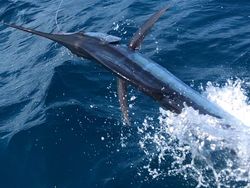 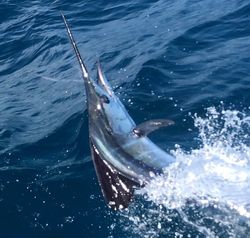