Dinner And A Show After A Late Departure

Waited to see what the weather was gonna do this morning. I had double 1/2 days booked and had already canceled the afternoon bottom fishing trip. So we had some flexibility for the morning trip. I had Tom, Kacey and Dan scheduled for the morning. With the St Lucie shoal buoy not reporting for about a week now I went to the beach to see what it looked like. Pretty nice so I reached out to Tom at 7 and we departed at 8. The inlet was manageable as we were at the very end of the outgoing tide. Not sure we would have gone out at 6:45. Caught some herring and big horn bellies. Bait was kind of tough and spread out because of dirty water from yesterdays seas.

Made our way offshore and with no winds and a light rain-shower I started bump trolling live bait. We did that for about 45 minutes to an hour with no bites. Started to get about 8-10 knots of breeze out of the SE so I switched up to the Tigress Ultra Light Kite fished off the bow. I got the first bait up and went back to get another and as I was walking back up we had a sweet sail bite and came tight. Kacey grabbed the rod and caught and released her first sailfish. During the fight we lost the wind so I cleared the flatlines and we went and got the fish. It was a good fight about 20 minutes. Went to fill up a balloon with helium and ran out of helium &#129318;&#8205;&#9794;&#65039;. Went back to roger fishing for about 15 minutes. But thankfully the wind gods were looking over me as the breeze came back and we got the ultra light kite back up and 3 baits out with two flatlines. Rear flatline went off and after another 20 minute fight Dan released his first sailfish. After that Kacey caught a big bonito then we got worked by the kings and every bait I put out for 10 minutes straight we came back with no hook. So I switched it up and fired out a horn belly and stated to Slide the kite out and the horn belly got inhaled by a sail 20 ft from the boat. Kacey was on wirh her second sailfish. I ran to the back to grab another bait to fire out because no baits in the water from The kingfish frenzy. As soon as I got the bow I watched the sail windshield wash 10ft from us getting the leader and out can the horn belly with the hook spun back into the bait. The herring I put on and fired out got slammed 30 seconds later and we were tight to either a big bonito or blackfin. Dan told me this would be the last fish as Tom hadn’t been feeling well. While Kacey fought the fish I put everything away and the leader hit the rod tip. Sunk the gaff in a nice sized Blackfin.

Good action and great memories for the first time ever on the ocean.

Dinner and a show!

Got some decent photos as well. 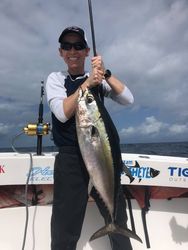