3 First Sailfish Releases And Some Cobia For Dinner

Had regular client Jason Bourque fishing with us today. He brought along his daughter Sage, his buddy Jeremy and Jeremy’s son Brantley. The goal was to try and catch the kids their first sailfish and then look for some dinner.

We bought some live bait and caught some more and headed offshore. The water was cool on the surface inshore 74.7 degrees in 65ft but we found a edge in 90ft and and it jumped up 4 degrees over a 1/4 mile. We had 2.5 knots of north current so I set a spread of live bait with 2 mono baits and 2 wire baits staggered. Our first bite was a slow bite on the right long and I felt like it was a sail by the action of the bite. We fed the fish and came tight and immediately pulled the fish off. It are again and we pulled it off again. The hook was spun around in the bait so I burned it in and the head was crushed and the leader chaffed. I got another bait out and had a beautiful sailfish bite on the left short rigger. The fish piled on the bait stung itself and left never to come back. A 1/4 mile later we hooked a sail on the left long, another pretty bite with the sail out of the water. We were finally tight and getting some jumps but a couple minutes into it the fish jumped off&#129318;&#8205;&#9794;&#65039;.
I put a full spread back out and switched everything to mono and we were hooked up on our 4th sailfish bite of the morning. The fished jumped in some circles and landed on the main line a couple of times as it circled around fortunately we didn’t break the main line and 28 minutes later Sage released her first ever sailfish.

I decided to move back down for another drift and we set back out and shortly after hooked another sailfish for Brantley. The fish jumped 5 times and jumped off. We all watched the bait fly out of the fishes mouth in what felt like slow motion. &#129335;&#8205;&#9794;&#65039;

Set back out and hooked another sailfish for Brantley and this fish was mean racing all over the place and jumping and screaming line to the north. Cranked everything in and started to back up slowly to minimize line loss and the line went slack. The main line had parted and all I could think was that I had not felt a bad spot in the line from when Sages fish jumped on it twice.

We gave it a little more time and had no more bites and decided we were gonna look for some meat. Given the current and the thermocline I was marking I decided to run inshore to look for cobia. We were running into the Donaldson and I saw a sailfish on the surface. I made a hard turn and ran over to it. Threw some baits out and a few minutes later we had 3 sailfish fighting over 1 bait. Well, they ended up knocking the bait off the hook. We pitched two more baits in the direction of the fish, and now 1-8 on sails we hooked a double-header if sailfish and Jeremy and Brantley we’re hooked up to their first ever sailfish as it was a father son double header. After about 15 minutes we released both sailfish. Thank goodness!

We saw 3 other fish cutting or in the spread during the course of the day. We also saw 7-8 jumpers. Lots of sailfish around.

After finally catching everyone their first sailfish we went after cobia.

We hooked 4 in the 25-32lb range and landed 3. Brantley and Sage both caught their first cobia too. 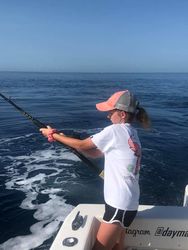 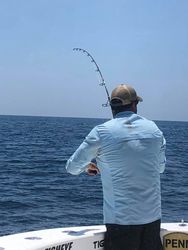 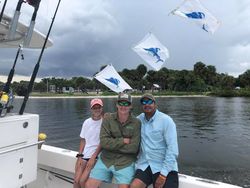 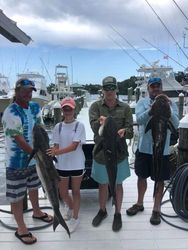